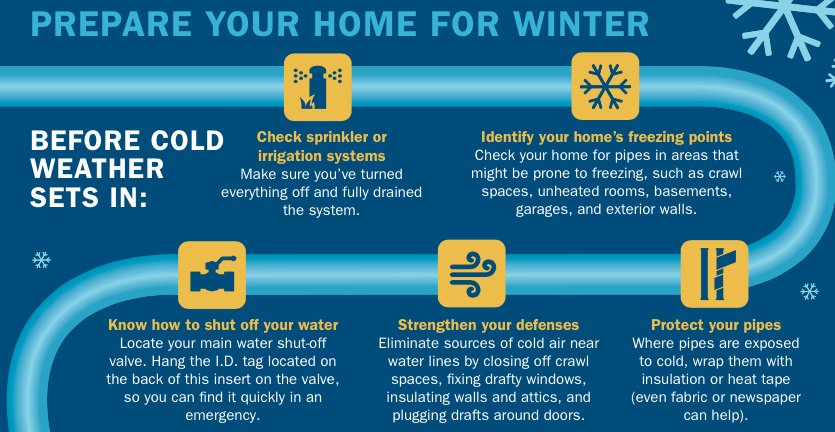 What are some common reasons for frozen pipes?

How can I prevent my pipes from freezing?

There are many ways to help prevent your water pipes from freezing in extreme weather. Some suggestions include:

Where are my shutoff valves?

There are actually two major shutoff valves in line with your service. The first valve, called a corporation stop, is generally located at the water main and is buried under the street. The other major valve is located next to the water meter. (We do not have ID tags) Other valves may be near plumbing appliances such as sinks and toilets.

What part of my service is my responsibility?

The resident's responsibility for maintenance begins immediately after the corporation stop. This includes the lateral to the homes meter box, and from there, up through the entire home. However, the water meter itself is the property of the Utilities. More importantly, the valve adjacent to the meter is the responsibility of the resident.

Should I maintain my main shutoff valve?

Keeping your main valve in good working condition will assure you that you will be able to turn your water off in the event of an emergency, in case one of your water pipes breaks, for example. Older style gate valves should be turned periodically due to possible corrosion build-up. Newer Teflon coated ball valves should stay in working order without any regular turning.

What should I do if my pipes freeze?

If your pipes freeze, there are some procedures that you can follow to thaw them. The quicker the problem is recognized; the better chance that damage will be minimized. Some techniques for thawing frozen pipes include:

Have a plumber’s number handy... in case of an unexpected emergency.