Incorporated as a commun

ity in 1894, the community once known as ‘English Prairie’ is a tale of two communities changed by the times.

Once thought to be a major port on the Wisconsin River for the lead mining industry in the hills south of the community, Muscoda changed its focus.

With the introduction of the railroad the community slowly moved.  The main street that once ran parallel to the banks of the river turned to 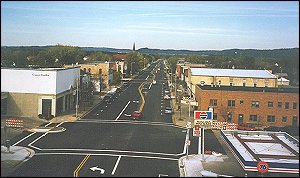 Muscoda remains a strong farming and industrial community to this day with a large industrial base envied by many other communities of the same size and why not?  With the back drop of majestic rolling hills and the hardest working river in America.

Muscoda, which means “Prairie of Flowers,” is a growing community of almost 1,300. Located in the heart of the Lower Wisconsin State Riverway and nestled in the corner of three counties – Grant, Iowa & Richland – Muscoda, Wisconsin is conveniently located at the junction of Hwy 80 and Hwy 60. If you are traveling on the beautiful 100-mile Scenic Lower Wisconsin River Road, Highway 60, which follows the graceful curves of the Wisconsin River, be sure to stop and visit Muscoda.

Muscoda, WI is a nature lover’s dream with access to thousands of acres of public land on which to hunt, fish or hike. The winding country roads can be enjoyed by auto, motorcycle or the hearty bicycle rider to view the many wildflowers or vibrant fall colors. If winter’s snow holds your interest, then enjoy a ride on the many snowmobile trails in the area or do some cross country skiing.

In the summer take a relaxing canoe trip down the scenic Lower Wisconsin River or try your luck at fishing. Muscoda offers the only riverbank campground (map) of its kind along the 90 miles of the Wisconsin River as it serves both water and highway travelers. The campground is complete with showers, electric hook-up or primitive campsites, and a dump station. Adjacent is a playground and picnic area. Within walking distance there are horseshoe pits, ball field, tennis courts and a public swimming pool. Be sure to visit the Muscoda Area Veteran’s Memorial, erected in 2009, located on Wisconsin Avenue (Hwy 80) at the west end of the Victora Riverside Park.

In 1982, Muscoda acquired the title of “Wisconsin’s Morel Capital.” The Morel Mushroom Festival is held annually the weekend following Mother’s Day with activities for the whole family.

Muscoda, Wisconsin is also widely recognized as being the home of renowned metal sculptor Ellis Nelson, whose works produced at his shop in Muscoda for several years have garnered worldwide recognition and publicity. He was featured on “Good Morning America” and on CNN. In 2013 his son, Tom Nelson, took over the business. For further information please go to darkmetalartworks.com.